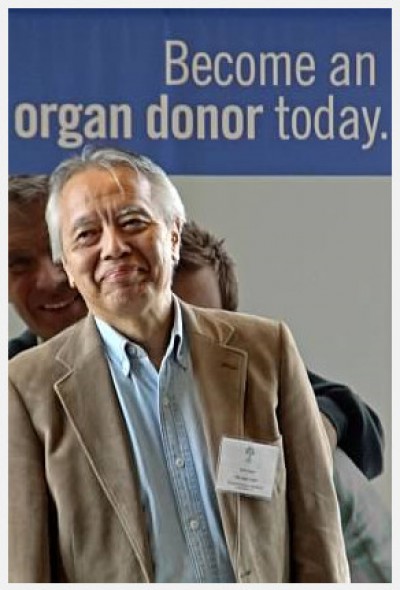 TRIO’s Japan chapter is one of our largest and longest lived and a primary reason we earned the description ‘international’.

Japan’s TRIO president, Yushi Nomura, faces an immense challenge to spur organ donation in his country - an extreme irony given that Japan has contributed much to transplant science. A past recipient of TRIO’s Lifetime Achievement Award, he attended the recent TRIO Board meeting in Philadelphia, bringing along a videographer. The resulting video will be featured in the Japan chapter’s 25th anniversary celebration, which happens next year. To see his recent presentation, go to TRIO’s Transplant Presentation Library on YouTube, and find Presentation #74.

Nomura radiates a ‘love your neighbor’ attitude of happiness and gratitude, perhaps because he himself is a two-time liver transplant recipient (from Baylor University Hospital), as well as a theology professor at Aoyama Gakuin University in Tokyo. His upbringing was Buddhist on his father’s side and Christian on his mother’s side. Yushi studied at Yale University Divinity School here in the United States, which perhaps contributed to his understanding of the widely varying religious attitudes between Japan and the US.

The number of transplants done in Japan is rising at a snail’s pace. The situation remains grim for most patients, and many end up going overseas. The welcome they receive varies widely throughout the world. Yushi gave the Board of Directors a glimpse of Japan’s cadaver organ donation statistics for the year ending in August of 2015. In an average year, the United States will generally do about 23,000 transplants, while Japan about 300. Even when considering that the U.S. has a population 2 ½ times greater than Japan, these numbers are shocking.

Why are organ donation rates so dismal? The Board members peppered Yushi with questions, and wondered what TRIO could do. It puzzles many how a country so technically on par with, or even ahead of, the United States is so dramatically different in this health area. He spoke of how the Japanese view brain death differently than most Americans. “A person who is brain dead but still has a heart beat looks alive and is still warm to the touch,” he said. “It is difficult in our culture to envision removing organs for donation from such a person.” This is one reason behind not allowing organ donation.

The Japan’s TRIO chapter is part of several efforts going on to promote organ donation, many similar to those in the U.S. Registering to donate via the internet, cartoon quizzes about transplant, adding willingness to donate on national health insurance cards, and showing people leading active lives after transplant are all in the mix. Yushi showed pictures of his TRIO office and Tokyo, filled with pictures of children who died awaiting the gift of life as well as those who did receive transplants. Prior to the Board meeting, he was in New York City visiting a Japanese child who received a heart at Columbia Presbyterian Hospital. He also conferred with various Japanese surgeons there.

But Japan seems an exception to the overall transplant experience in eastern Asia. Its neighbor, South Korea, for example has blossoming transplant programs, and southern China and the Philippines each are further along. Yushi hesitatingly speculated that another reason might be the difference in philosophy between Buddhism (most Japanese are Buddhists) and Christianity (a large percentage of Americans are Christian). If a Buddhist sees a person suffering, he is empathetic, will pray for that person, but will not try to alleviate the suffering because suffering is part of that person’s life and should not be interfered with. If a Christian sees a person suffering, he does everything in his power to alleviate that suffering because he is expressing his love and caring in this way. So a Buddhist would not believe in giving an organ to someone suffering, while a Christian would want to give an organ to help the sufferer. He indicated that South Korea’s population was over 30% Christian, while Japan’s was only 0.6%. Fittingly, outside the Philadelphia Gift of Life building was a huge banner with a picture of the soon to be arriving Pope Francis with his quote, “Organ Donation is a Testimony of LOVE for our Neighbor.”

You can read more of Yushi’s philosophy and see his artistic ability in his book, “Desert Wisdom: Saying from the Desert Fathers” (Orbis Books, third printing, 2003). Along with his Yale classmate and noted writer, Henri J.M Nouwen, it’s not about transplant, but examines the stories and sayings of the Christian hermits during the fourth and fifth century Egypt that ultimately figured strongly in Christian tradition.

View Yushi's talk at the TRIO national board meeting on YouTube at:

and his Post-transplant cancer testimonial at: