The Miracle of Lon Bullman 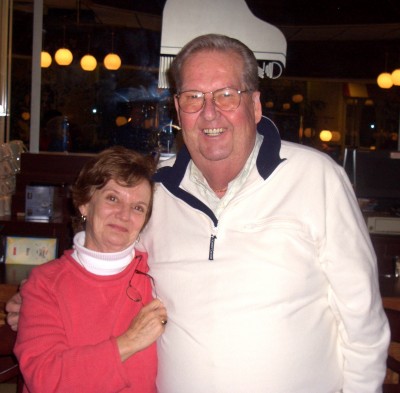 If a man who’s had three heart attacks, fought several bouts with cancer and overcome other serious illnesses tells you his life is a miracle, you pretty much take him at his word.

Lon Bullman is a miracle man and a fighter--after getting knocked down by so many health challenges, he keeps getting back up again. He’s also a lucky man, and he knows it. If not for the blessing of receiving a donor heart in 1997, he would not be here to tell us the tale of his wondrous life.

The morning after his transplant surgery, Lon says, he knew he’d “made it up the mountain and was at its very peak. I still have not come down.”

Born in 1936 in Kalispell, Montana, the oldest of three children, Lon had a peaceful childhood playing with neighborhood kids; his house sat on a hillside, a hillside he sledded down in the winter and wagonned down in the summer. His father worked at a sawmill, and in high school, Lon began working at a sawmill owned by the St. Regis Paper Company too.

At the time, Lon felt good. He didn’t yet know he’d inherited a heart condition that would eventually kill his father and all four of his father’s brothers.

Lon’s first serious health problem was a mild stroke in 1983, then the next year he suffered his first heart attack and underwent a triple bypass. Soon after, he had a malignant bladder tumor removed and subsequently, in two-year intervals, he had angioplasty in both legs, a second heart attack, and a third attack followed by double bypass surgery.

Finally, in 1992, he was diagnosed with congestive heart failure. The doctor who diagnosed him gave him one year to live. Lon’s wife Maudie remembers that terrible time. “It’s the most terrifying news anyone can receive,” she says. After already losing her first husband to illness, she now faced the frightening prospect of losing her second husband as well.

Lon had met Maudie when they both worked in St. Regis’ Atlanta office. Lon had transferred into the sales department by then and had relocated several times around the country in that position. When Maudie met him, she was attracted by his “terrific sense of humor. He always had a positive outlook,” she says. “And he’s a salesman,” Maudie laughs—good at selling product, including (or especially?) himself.

After Lon received his dire prognosis, he sought a second opinion, and this cardiologist gave them better news: Lon was still young and a perfect candidate for a heart transplant. He was put on both the transplant list and a daily regimen of pills to keep his condition in check. Then there was nothing to do but wait.

Believing their time together might be short, Lon and Maudie set out to see more of the world. They took many trips, including cruises down to the Caribbean and once up to Alaska. Alaska was especially thrilling, the rugged landscape a departure from the Florida terrain they called home.

One year of waiting, living and traveling turned to two, and eventually to five. By 1997, Lon’s heart had weakened considerably and during his third hospital stay of the year in September, he was told it was time. He moved immediately from the bottom of the transplant waitlist to the top. His doctors advised Lon to stay in the hospital until a heart became available, a wait that could be as long as three months; Lon didn’t want to, and with his salesman skills, persuaded them to let him go home for a few days. He promised them he’d be back on October 6th, five days away.

Lon spent the next couple of days packing and relaxing. On October 3rd, he went out on his boat to enjoy some peace and quiet with the morning paper. The silence on the creek was broken by his beeper: Maudie was trying to get hold of him. He called her back on his cell phone and learned there was a heart waiting for him at the hospital in Gainesville--if he could make it there in three hours.

“You had better believe it when I tell you all of the 180 horses in our boat were put into high gear,” Lon says. Lon made it back home in record time, got his bag and his wife, and while Maudie put the pedal to the metal, Lon called ahead to the police department of each town they would be passing to warn them they’d be flying down their roads. No one stopped them.

A little over two hours after he’d been beeped on the creek, they pulled into the hospital parking lot, and Lon was on his way to having a new heart.

When Lon came to that evening, he felt confused. “I knew the surgery had been done, yet I felt no different,” he says. But Maudie was holding his right hand and his son was holding his left hand, and they assured him he had a new heart. “I was filled with a great sense of relief,” Lon says. “It was an unbelievable feeling of happiness for me and sadness for the donor family.”

Lon’s health since the transplant has not been perfect: among other things, the immunosuppressant drugs have led to multiple incidents of skin cancer, including one time the cancer metastasized and Lon had to endure chemotherapy treatments. Lon and Maudie don’t dwell on the negatives of their situation, though. They use the word “miracle” often.

“It’s truly a miracle what the transplant has done for our family,” Maudie says. Lon has been around to see five grandchildren born in the 15 years since his transplant.

Lon wrote letters to his donor’s family but never heard back. He doesn’t know anything about the person who gave him his new heart, yet he thinks about the family of that person often. “To realize that someone lost a loved one, and that loss in turn let me live, is rather hard to comprehend,” Lon says. “I shall be forever grateful that I was allowed the opportunity to receive this miracle, and my prayers shall always include the family from which it came.”

To read Lon's story in his own words, click here link to: Lon Bullman's story