Mark Jackson, former national board member and currently a member of TRIO's Corporate Advisory Board, serves as Honary Consul General of Japan to Alabama.  On his recent (October 2018) trip to Japan, Mark met with and presented greetings and gifts from TRIO national to our TRIO Japan chapter leadership and members.  Two time liver transplant recipient (done in Dallas) and former TRIO Japan chapter president, Yushi Nomura, had visited TRIO events in America on several occassions before passing last year of cancer.  His wife, Karin Johnson, led the chapter delegation and in her e-mail of October 19th offered the following notes from this visit, titled: "Some thoughts about our meeting" . . . 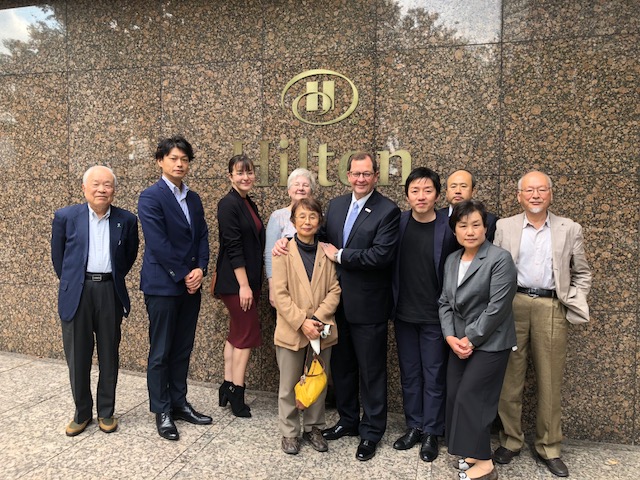 I am too embarrassed to call this a "synopsis," as I was not taking notes. I will try to summarize some of the things we talked about.

You told us about your role at TRIO and how you came to be involved in it through your business relationship with Jim Gleason. You also described your work as the Honorary Consul General and your work with sister cities in Japan, which is connected to a long thread of relationship to Japan running through your life and your father's life.

Regarding business, you asked us about how we raise funds for our operating costs, and Mr. Aoyama said that our income is from membership fees [I believe that individuals and groups have different membership fees].

You asked us about our connection to TRIO in the US and what form we would like it to take in the future. All of us agreed that this "international" aspect of Transplant Recipients International Organization was important and should be nurtured. On the Japan side, we spoke about how valuable the relationship was to us (I would say this is especially so since the experience of receiving transplants outside of Japan was so common to our membership, our numbers are few, and the needs of patients are great).

We spoke about the very low numbers of transplants taking place in Japan and the impact that has on patients, forcing them to go overseas (if they are able) for medical help. They also have difficulty getting medical care after returning to Japan, both because of less experience with transplantation here, and (a vicious cycle) less willingness among doctors to undertake care for patients who are not as well understood. So in our chapter we are trying to cope with problems both before and after transplant. [One thing that did not come out specifically was how much expertise our leadership has in helping facilitate the process of finding a transplant center overseas and then getting the patient there. This has been a big part of TRIO Japan's work.]

You expressed your willingness to bring our message to the government, and asked Mr. Aoyama to give you a letter which you could hand directly to government officials at your meeting in December or January. Mr. Aoyama was extremely glad to hear that and agreed that he would.

Individual members of our group shared some of their stories:

Yoshi Aranami, herself a registered nurse, told about how her teenaged daughter had passed away in Japan 32 years ago in need of a liver transplant, and how she and her late husband had then dedicated themselves to this work.  (Allow me to add that "dedicated" does not begin to describe all they have done.)

Keiko Nakazawa had a son who suffered from primary pulmonary hypertension. He passed away last year (in his late twenties or early thirties).

Naomichi Watanabe's wife received a liver transplant in Berlin. (She is fairly well.) He reported a conversation with her Japanese doctor in Germany about the problems facing transplantation in Japan. The doctor said that transplant doesn't "fit" Japanese ideas of life and death. But Mr. Watanabe told the doctor that the reason there are not more transplants in Japan is because the doctors do not pronounce death, making organ donation impossible. The doctor in turn grew furious and asked him how he dared to say that. Doctors, he said, risk being sued, as well as having to deal with the emotional implications of those decisions. Mr. Watanabe said that changes in legislation are necessary to address this situation.

Shigeru Wakabayashi's son was a brilliant student. He first received a partial liver transplant from his mother (also the person who made the origami which was given to you). Two years later, when he was a student at Tokyo University, he required a second transplant, this time from a brain-dead donor in Miami. He died when he was 32 years old. He had been in reasonably good health until the last two years of his life, when he succumbed to cancer.

Akihito Sakuma is a publisher who has been working with TRIO for many years. He published the book by Ryoma Aoyama which was given to you yesterday. Mr. Sakuma asked about the status of the "5% rule," and said that some Japanese doctors in America have said that Japanese patients might be blocked from transplantation there in the near future. You suggested that we ask Jim Gleason for an opinion about this. [I have sent you a copy of my correspondence with Jim on this topic, but I see I have sent it from my school computer to a different email address from this one. I will copy it to this address on Monday.]

Ryoma Aoyama, our president, is the father of a 4-year-old girl who received a heart transplant two years ago in Seattle. He is trying to raise the awareness of the Japanese public of the need for transplantation, in order to increase the rate of transplantation in this country and make it unnecessary for Japanese patients to become medical refugees (my phrase).

Shinya Yokoyama, our vice-president, became involved in TRIO through fund-raising for Mr. Aoyama's daughter. (I think this is accurate.)

I was married to Yushi Nomura, the second president of the Japan chapter until his death last year. He received two liver transplants (1990 and 2004) in Dallas.

We were so glad to meet with you. Thank you for visiting with us! We are looking forward to continuing this relationship.

On a more personal note, I hope you are having a productive and enjoyable trip, and will have a safe journey back home.